While perusing through my favorite blogs this morning, I came across a saying that while I've heard it many times, has never sunk in the way it did for me right now.

You can fight a bear for a little while.

I have just been in this funk for a little while now and I can't seem to shake it. I'm sure it's the combination of things:
This sickness that has been going on with all of us for a little over a week now, but feels more like a month. It's just been your typical winter cough and congestion, but goodness, that takes it's toll. Especially when you have a little one that doesn't seem to care that he can't breath, he just wants to play play play. I literally broke down and cried this morning because (Lord, I'm tearing up again.. what is wrong with me??) I want nothing more than to run around at the park with him, but I just can't do it. I completely lack the energy and break out in a coughing fit from walking from one room to the other. I REALLY wish I had his grandparents right down the street that could just pick him up and take him out to play. It's the little things...

We also have so many changes coming up and I am starting to think more and more that I'm letting the thought of them all get to me. I think we'll handle everything just fine, some of them will be harder than the others, but we'll get through. And probably stronger and happier than we are now. It's just the thought of everything. The waiting and thinking. I worry too much. While I love to have a plan, sometimes I think life would be so much easier for me if everything was just thrown at me at the last minute. No time to worry. In all honesty, I need to be praying more. I shouldn't be worrying. I need to learn to better give my worries to God. It really could be so easy... if I just did it along with writing about it. Let Him be the planner. His plans are perfect.. mine usually? Not so much.

But, I can fight a bear for a little while, right? None of this is permanent. We are all going to get over this crud. In fact, it's going to keep getting warmer and warmer outside and staying light later. We'll be able to get outside a lot more. While Andrew may be bored to tears, he won't remember this. And really, if he's not feeling good, he needs the down time too, like it or not.
And all of those changes, they are going to come. Like I said, we'll get through them. Not all of them are bad, maybe just scary at the time being. God knows what our future looks like and while I don't want to say that He won't give us anything we can't handle, I do know that if I trust in Him and turn to Him, I can handle anything with Him.

In the meantime, look at this handsome face I get to look at all day: 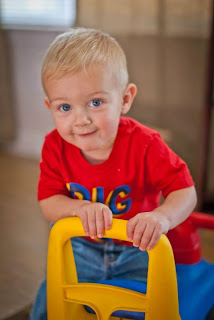 With all of that cuteness, nothing can be TOO bad, right?
Lots of love, Jessica at 12:19 PM Labels: Dumps, Making the best of it., sick sick sick
Email ThisBlogThis!Share to TwitterShare to FacebookShare to Pinterest

I love you, I miss you and I am constantly thinking about you.

your little boy is delicious looking..I could just eat that face!!

I think we need an ice cream date on Monday. Sounds like we have some share time coming up.

He is so adorable!! We have been hibernating inside this week as well. Cannot shake the crud either! "This too shall pass...."
Hang in there, girl. Praying for you!