Again, even with the second time (maybe even more so), I find myself astonished at how fast the time flies. Wes being here is so normal and so natural that it feels like he always was. And just like THAT.. it's hard to picture what life was like before him. Funny how it all works.

So, what's up with the babe?

He's in 3 month clothing and size 2 diapers with size 3 right around the corner.
I'm not sure how much he weighs, but if I had to guess I would say 14.5-15 pounds.
He's drinking 5 ounces every 3 hours with the exception of that first bottle of the day. He wants 6 ounces in that bad boy. 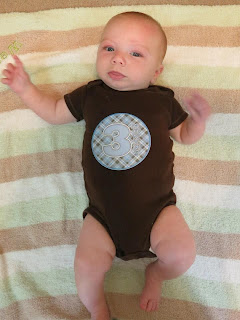 He's accomplished so much this month. It's been a fun one!
He's rolling from tummy to back.
Cooing, smiling, and he just started giggling.. which is the best little noise on the planet.
He had his first trip to the mountains. In fact, he's already toured The Biltmore.. very advanced, he is.
He goes to sleep between 6 and 7 every night and *knock on wood* sleeps sometimes until 6 the next morning, but still waking up at either 4 or 5 a lot of mornings for that 6 ounce bottle. If he wakes up early to eat, he goes right back to sleep. If he wakes up 6 or later, he'll stay up for about an hour then take a nap. You won't catch me complaining about either scenario!

He is just in LOVE love love with his big brother. He smiles every time Andrew comes around and will follow his voice anywhere. The best decision we made was to give Andrew a sibling (and vice versa). 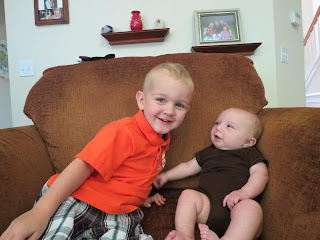 It may be twice the work, but it's also twice the love and fun. My heart feels like it's going to burst seeing them together.. smiling at each other, holding hands.. it kills me. And one day we'll all laugh about the little moments like Andrew hammering him in the head with his toy hammer saying that he's "fixing Wes".... 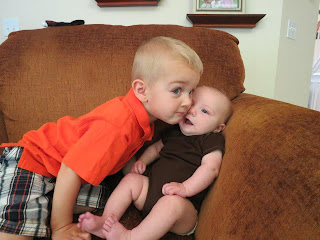 Baby Wes, we just adore you! You were the perfect addition to our now complete family. I don't know why I let myself worry and worry over not having room in my heart to love another child like I did your big brother. What everyone says is right.. you just do. I couldn't picture life without you! Your Daddy is already in love with you as well and he can't wait to meet you, little guy! 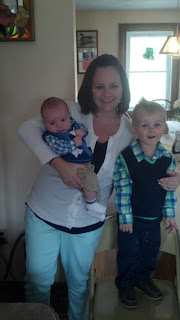 Lots of love, Jessica at 10:48 PM Labels: Wes
Email ThisBlogThis!Share to TwitterShare to FacebookShare to Pinterest

*squee* he is just so adorable and I love seeing pics of the two of them!! kills me too :)

Awww! They are the cutest! What an adorable family!

How do you look like such a hot mama after just having a baby??? (But seriously, tell your secrets..)

He is SUCH a cutie! And I love how happy Andrew looks around him. What sweet boys! You're in my thoughts and prayers, girl!